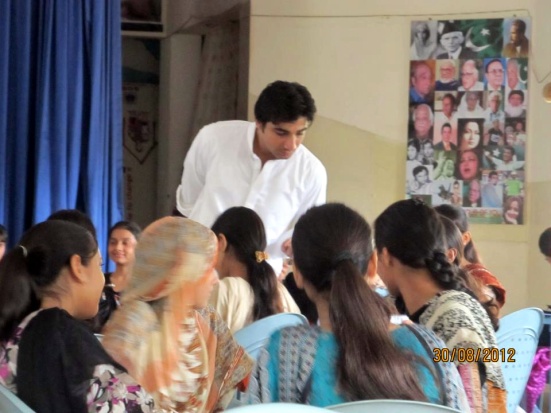 Last year this time around, I conducted a career counselling and motivation session for an NGO entrusted with orphans. The main idea was to let these children’s imagination run free and reach for something which goes beyond the shackles of daily routine. An idea that their past doesn’t matter, a dream that tomorrow is everything and a belief that hope is real if properly believed in.

My better motivated fellow speaker came up with an activity to pursue this. We distributed blank papers to our audience and asked them to sketch what they aim for, how they see themselves in 15 years and draw a successful version of themselves. While this is a daunting task even for adults like me as the activity inherently asks the participants to define success and happiness, nevertheless it was a social experiment we wanted to undertake.

Surprisingly the children gave us positive responses through their drawings…a 16 year old skinny lad sketching Afridi showing his passion to become a cricketer, a brown eyed girl sketching a hospital exhibiting the intention to be a doctor and some whispering girl designing dresses on the paper leading us to think she wants to become a fashion designer.

And then there are the quiet ones. And to such one 14 year old I went… she had drawn a hospital, a bank, an aeroplane and a school.

“So you are confused whether to become a doctor, a banker, a pilot or a teacher?’ I asked

“No”, she replied with a shy smile not meeting my eyes.

“I want to make a hospital, make a bank, own the jets and run a school”.

Probably she was too embarrassed that other children will make fun if she reads her sketches out loud.

Our job there standing in front of those children was to rationalise their dreams but some dreams are too big to rationalise. Perhaps that’s when we start bringing the excuse of reality in.

I thought that soon she would enter the practical world and would face the brunt of ‘ordinary’ machinery of life. She would face two choices not far from now… either to cut her dream short and settle for something achievable or to consider her every or only achievement to be part of the bigger plan.

In both cases, she might end up owning only one clinic or running a school, but her attitude to life would be completely different. Perhaps as different as dawn and dusk for they both have the same light … but different meanings assigned to them by nature.

But perhaps the gray lining between dawn and dusk is not as dangerous as the dark night. I should have advised her to be aware of the darkness, should have told her that the people she sees are the ones who spread the light when the sun is around. Look for the people who light up the night with their imagination. Be that people. Be that dawn.

My and my better motivated friend trying to explore their dreams

One thought on “Dreams of a 14 year old orphan”

A full time worker and a part time writer who doesn't like icecreams... passionate about politics, economy & philosophy.

“And those who were seen dancing were thought to be insane by those who could not hear the music.” - Friedrich Nietzsche